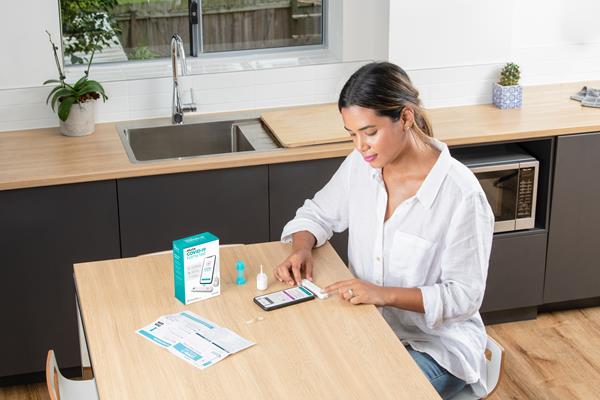 Ellume received an emergency use authorization to sell its at-home Covid-19 test over the counter. Photo credit: Ellume

The Covid-19 pandemic gave people a taste of at-home testing, with insurers required to cover tests done both at drive thru-sites and at home, with or without a prescription.

Now, companies are betting on a broader rise of at-home diagnostics, as people become better acquainted with virtual visits and seek out more care from the home.

Preventive tests, such as mammograms and colonoscopies, fell sharply in the early weeks of the pandemic. Although they’ve started to rebound, many patients remain undiagnosed or face waits for office visits.

“Everyone’s so focused on Covid testing. The other things don’t go away, you know? Diabetes hasn’t gone away, colon cancer hasn’t gone away,” LetsGetChecked CEO Peter Foley said at a MedCity INVEST panel.  “We’re seeing a massive downturn in the number of tests that are being performed in 2020 and there’s a consequence to that.”

To combat this, several insurers sent at-home colon cancer screenings kits to patients who were due for their exam. Although they work as an initial screening for low-risk patients, they’re still not as effective as a colonoscopy.

Last month, Quest Diagnostics rolled out a similar type of at-home screening. The company made its first bet in consumer-directed testing long before the start of the pandemic, when it launched an at-home STD test in 2019.

Quest expects to make $250 million in revenue from at-home testing by 2025. Including Covid-19 tests, that number could be eight times higher.

“What’s now interesting is health plans are also covering consumer-initiated testing for Covid-19,” Cathy Doherty, senior vice president of clinical solutions for Quest, said in an interview. “Pre-pandemic, I don’t think anyone would have imagined a health plan paying for a consumer initiated test.”

Julia Cheek, CEO of at-home testing startup Everlywell, has also been closely watching insurers’ mandate to cover Covid-19 tests. The Austin-based startup recently got the OK from the Food and Drug Administration to offer its at-home Covid-19 test without a prescription.

Initially, some components of at-home testing weren’t covered, such as the cost of shipping, or the telehealth consult that Everlywell offers with its tests, Cheek said.

“We’ve been able to educate more on what people need covered in their plans as we go through this work,” she added.

Interest in Everlywell’s other tests also increased. Cheek said sales of STI test kits doubled, and tests for heart health, HBA1C and women’s health tripled. Most of its tests are laboratory-developed tests, meaning they’re not subject to FDA review, though Everlywell recently got an FDA-cleared cholesterol test as part of a bigger acquisition.

As insurers continue to cover Covid-19 tests, and a limited number of at-home screenings during the pandemic, both Cheek and Doherty are watching closely to see if that continues in the future.

Not all tests are created the same
Though more people have become acquainted with at-home testing, the pandemic has also highlighted wide variations in tests’ accuracy. Research published in Plos One last year found that Covid-19 tests reported a false negative rate of up to 29%, meaning in the worst case, they could miss 3 out of 10 cases.

At first, at-home tests were limited because they were required to use a nasopharyngeal swab, Foley said, which can be more difficult and sometimes uncomfortable. But after researchers demonstrated a nasal swab or a cheek swab could work, they proliferated.

It still took some research to figure out what actually works best for getting an accurate result without supervision. For example, Cheek said Everlywell found it would be easier to use a nasal swab instead of a saliva swab for its at-home test kits. The saliva swab requires people to not eat, drink or brush their teeth an hour before the test.

Now, the FDA is putting more of an emphasis on over-the-counter tests, and devices where users can receive their results at home.

At-home testing startup, Ellume, got a $232 million contract from the Department of Health and Human Services in February to manufacture more of its at-home rapid antigen tests. Users put a swab in an analyzer to get the result at home, instead of mailing it into a lab.

Other startups, like Cue Health, are developing similar technology for at-home flu tests.

Sean Slovenski, CEO of diagnostics startup BioIQ, expects a “groundswell” of routine diagnostics to make up for lost time during the pandemic. He sees an opportunity for fully at-home tests to fill the gaps, taking overwhelmed labs out of the equation altogether.

In the meantime, people face an almost overwhelming amount of choice when it comes to testing, Covid or otherwise. Slovenski likened it to the early days of WebMD and other health websites, when patients walked into the office having “diagnosed” themselves.

“We’re going to see some of that here too. It’s going to take time for people to get diagnosed at home and know what’s good, not good, accurate or not accurate,” he said. “How do you interflow telemedicine into that? It feels very similar to this overwhelming wild west.”